Who Went: Roy and Heather

Roy and I are always on the look-out for good Mexican restaurants in our area, and fortunately, we've found a few places that are muuuuuch better than Los Hermanos (review to come). We heard about this little mexican place and were excited to try it out. 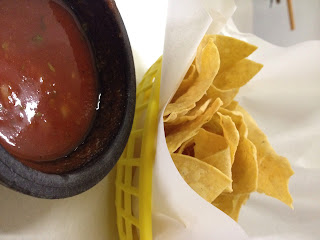 First, the chips and salsa. First impression for both of us: Woo hoo! The chips were still warm and the salsa was perfectly spicy. But, as the minutes passed, I started to notice how quickly the chips turned cold (which was fine) but what I disliked was how hard they became. Crunchy is not the way I'd describe these (because crunchy is good and what we want). They were hard and I found them sticking my gums and mouth and hurting them. But maybe that's me being too overcritical. The salsa was amazing though! Super flavorful and spicy (Roy and I like spicy food a lot, so we were happy). It was a little watery, but the flavor made up for it.

This is Roy here.  I just wanted to add that they were delicious! 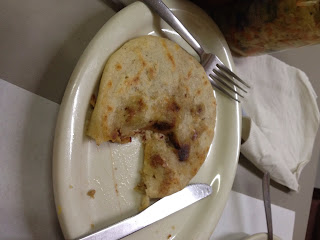 First to arrive, our AMAZING Pupusa. Filled with pork, cheese, and beans, I couldn't wait to try it. Roy raved about Pupusas from his time in Nicaragua so I jumped on it when it came, and burnt my tongue! But it was worth it, because it was tasty! The tortillas were perfectly crisp.

The Pupusa had good texture as my wife has pointed out and the flavor was great.  Comparing it to other pupusas though, I thought it lacked in cheese and beans.  But it had plenty of meat and flavor to make up for it.  All and all, it was great to eat pupusas again and it was super cheap ($2). 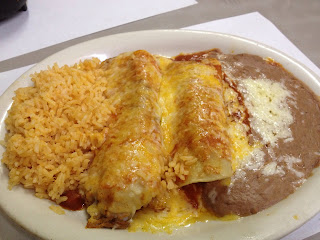 Then, my dish of a beef enchilada and beef tamale came, with beans and rice. The rice was the best Mexican rice I've ever had. Even Roy, who dislikes mexican rice, said it was good. The beans were delicious as well. Nice and creamy, hot, and with good cheese on top. The beef enchilada was very good. The meat was savory and the tortilla was anything but dry. The tamale was another story. While the meat was alright, the masa (the corn dough around the meat) was kind of gross. I couldn't get over the texture. It was squishy and mushy and made it super hard to finish. I wouldn't get it again. 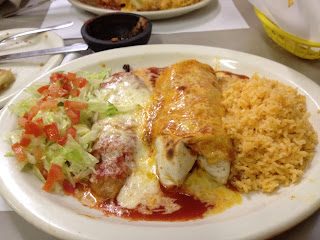 Now for my dish.  You can already tell from the picture that this will be delicious, and it was!  The burrito had a slightly crispy tortilla with plenty of moist meat.  The rice also had more flavor than most other restaurants, which is a huge plus in my book.  For those that don't know, the Chile Relleno is a pepper filled with cheese and covered in cheese and some fried dough.  It was not too spicy which is important considering some people don't like a lot of spice.  The last few bites had turned quite cold but that is my fault for being a slow eater.  The salad was good, but I felt it was too fresh for a mexican restaurant, meaning the flavor did not mix as well as I had hoped.  Overall, though, this plate was very good and very filling for such a cheap price. 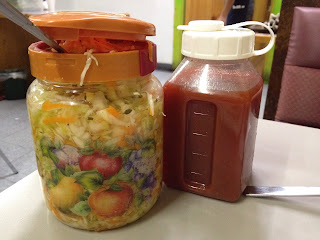 Roy was pretty excited that this came with our food. The right is more salsa, which was great, since we were out just a short time after we got there since it was so good. However, they never refilled our chips, so it was pretty pointless... which was sad...
Anyway, on the left is ensalada, which Roy had in Nicaragua. I didn't try it, because I've had some before and didn't like the dish. But Roy tried it and said it was nothing special.

Overall, we liked the place, and they gave a lot of food for the price. We were pretty bummed that our chips weren't refilled, but we were really full by the end of it anyways. It's a family owned business, so it's cute. The environment from the outside is a little disappointing, but once we were inside, it was fine.  I did feel a little out of place, however, because we were the only white Americans in the establishment. But I guess that just means it was really good food!

What you should do: Go! Overall, it was full of flavor and for a good price. And you'd be supporting a cute family in their business!
Posted by Unknown at 10:29 PM